Fuel Prices - Where are they going

Has anyone sees the documentary "Who Killed the Electric Car"? Well its an eye opener on how the corporates and governments have not been promoting the battery operated cars and rather promote the fuel driven cars. Well with the fuel prices globally crossing $135 a barrel and the government thinking of decontrolling the fuel prices, some websites are reporting that the price hike could be as much as Rs.17/liter.

Whats going to happen to people like us who like to drive. I drive down to office every day in my car. With all the odd hours of working, the public transport system is not of much help. Although i can use the metro but have got to change it twice before i reach my destination and that becomes a major hassle. And if i keep coming by my car my monthly budget is going to down the drain. They also go on to say that petrol price increase will in no way effect inflation. But thats not the entire truth although it might not have any effect any price increase or decrease but the fact still remains that it will effect the family budget. And doesn't that account for inflation.

Anyways get ready for the shock of your life and it seems that the fuel prices are only headed upwards from here. And btw, i am already finding an alternate means of transport.
Just For you Paramjit 1 comment:

All of us who thought that buying gold by our parents and grandparents in every occasion was a stupid and a very expensive thing, will be surprised to hear that Gold has beaten inflation today and will keep on beating inflation. Gold seems to be the one investment which time and again has been proven to be a solid investment and every portfolio should have exposure to gold. I like most of us out there also have some investment in gold but no in the true form of investment but just through all the gold that my wife keeps buying as jewelery or keeps getting the same from some relative or other.
Some experts feel that every portfolio should have atleast 10% of the total investments in the form of GOLD. This can hedge a lot of investments. A survey done by the Business Line shows the following results on the reasons of why people buy gold : 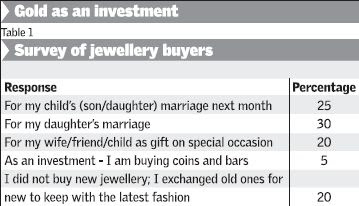 Some of the advantages you get in investing in GOLD are :

But it seems GOLD has not given returns as high as the SENSEX has given over a period of time but then it has stayed above the Inflation. Plus how can we ignore the emotional value attached with owning Gold.

So dont worry about investing in GOLD, just remember dont invest too much in GOLD.

Cost Of Living In Delhi

Email ThisBlogThis!Share to TwitterShare to FacebookShare to Pinterest
Labels: Markets

Hi Everyone, Although i have been talking so much about this Contingency fund, but i want to make a confession. I have just recently started getting it together and now i have added a bar on top left hand corner of my blog to follow it up and also to display it to the entire public about my progress.

Anyways you can see for now that it is progressing very slowly and i am hoping to complete by mid of next year. But now that i am writing about it, i just remembered, what if the contingency fund requirement increases by that time. Anyways atleast the graph is there for now.

What is P/E Ratio

Life's Goals
Just For you Paramjit No comments:

COST OF LIVING IN DELHI

How much does it cost to live in Delhi, India? Well this becomes an important question for all those people who are planning on shifting to Delhi for any reason. The top reason for shifting to delhi is usually Job related. Delhi being the capital of Delhi boosts of a good infrastructure as compared to the other cities in India. With the world class metro train running through Delhi, the Delhi Transport Corporation(DTC) adding new buses, New flyovers coming up everyday and wide roads, it is a good city to live in especially with Common Wealth games coming up in 2010. Except for the extreme temperature conditions(too hot in summer and too cold in winter) that plague the city through out the year its still worthwhile.

1. Renting an Apartment : Renting an apartment in Delhi is a difficult task in itself, but the costs for a 2 BHK can range between INR 5000 to INR 50000/- depending on the location. The NCR(National Capital Region places around delhi like Gurgaon, Noida etc.) seem to be the hotspots with a lot of developments in these areas and a lot of expats living here. South Delhi has some very Posh locations and a lot of companies have there offices in and around South Delhi and the cost of renting an apartment in South Delhi can range from 15000 INR to 25000 INR. Apart from the rent usually the landlords prefer to take a security deposit equivalent to 3 months of rent , which is returnable once you leave the apartment.

2. Groceries : The cost of groceries per month can be between INR 12000 to INR 16000 for a couple with a plenty of new retail stores opening up in Delhi everyday, its very convinent and fruits and vegetables availble in Delhi are usually fresh.

3. Eating Out : For a couple on an average the cost of eating out in a good restaurant can be between INR 1500 to INR 2000, and add another INR 1000 if you include drinks. Generally a beer in a restaurant can cost between INR 150 to INR 250. Food is generally on every Delhite's mind being a mainly Punjabi Populated, There are a plenty of good small restaurants available and the street food is also generally very good. The cost of eating out in a small restaurant or street side is about INR 250 to INR 500 for a couple.

4. Petrol Prices : As is the case around the world petrol prices are very volatile are bound to change soon but presently the prices of petrol are around INR 45 to 48 per litre.

5. Renting a cab/taxi : There are a plenty of call cabs/taxi services available and usually charge anywhere between INR 15 to INR 50 per kilometer of travel. You can also hire a cab for "4 hours and 80 km basis"which ever is first for INR 800 to INR 1500. With the Metro service available its getting very convinent to travel.

6. Communications : Mobile calls are maybe the cheapest in the world with a local calls can go as low as INR 0.50. There are two kinds of services available GSM and CDMA with multiple operators for both kinds of services. Handsets can start from INR 500 can go upto any amount. You have all kinds of value added services from mobile operators available like internet, GPS, text messaging, Multimedia Messaging etc.

8. Shopping : Shopping in Delhi is not generally a very costly affair unless and until you are targeting some top designer brands for which i think the cost would be the same everywhere else as well. Clothes and shoes are generally available across all Malls and shopping centers (Scores of them across Delhi). Branded and unbranded stuff is available. With a cost of unbranded jeans starting from INR 900 and shoes starting at INR 1500. A branded suit can be anywhere between the range of INR 5000 to INR 10000. You can also visit a retailers website with major stores in and around Delhi and all over INDIA here to get an idea of some prices of stuff.

I guess you can sum up your monthly budget from the information above. And maybe get a fair idea about cost of living in Delhi, INDIA.
Just For you Paramjit 8 comments:

Some money saving tips you should really go through and follow....

1. Use Cash : Where ever possible avoid using credit cards.

2. Use Small Savings transfer : Get your online account to transfer a fixed sum every month to another account through which you can build a contingency fund.

3. Stay At Home : Dont go out much stop eating at restaurant's and stop your weekend trips to the mall instead stay at home and bond with the family. And also end up saving cash in turn.

4. 30 day list : If you have a sudden impulse to buy anything, put it in a 30 day wait period and after the 30 days are up if you still need it only then buy it.

6. Talk to your Spouse : Its important that you and your spouse should be in the same line of thinking about saving cash.

7. Use a Spread sheet for tracking expenditures.

8. De clutter your home : The less stuff at home the less you spend on maintaining it and also it is said in VASTU it lets positive energy flow.

9. Pay Savings and debt first : Whenever you sit down to pay your bills you should first pay off you savings account then your debt account and then the bills.

10. Try To supplement your job Income : Let your income from you job not be the only income you earn, try getting a substitute.

Are you Financially Healthy

Not Many Of us are comfortable talking about money with our loved ones. And to tell you the truth it really is worth it. Money is one of the main reasons of disputes between couples and it is always best to discuss this issue and keep everything transparent so no issues can come up later. This can help making decisions easier about money matters.

The same should also be true about children. Parents actually decide how children will deal with money. It can really help the children make better decisions. Regarding the children we should

1. Include the children while talking about family budgets and bills.
2. Show th children the bills and also how we are planning on paying the bills.
3. Open a savings account for the children and get them into a habit of saving.

Remember it is you who has to decide how to discuss about money and the more you talk about money in the family the better understanding your family will have about it and can help you making better decisions.

Are you Financially Healthy

Just For you Paramjit No comments:

Paramjit
Delhi, Delhi, India
An Engineer with keen interest in money matters. I love to spend Money and now have decided to start saving since i have two children now and want to save for their Colleges. Also want to share my knowledge that i gain in the process with everyone.